According to the EU cookie law, you must accept the use all the features of our websites
I Accept More Information

The valve block is a small but significant component of the air suspension system. Therefore, it should not be neglected when diagnosing possible system defects. Symptoms that seem to point to a leak in an air spring, might also be a defect in the valve block. Let’s start with explaining the general function of the part before diving deeper. 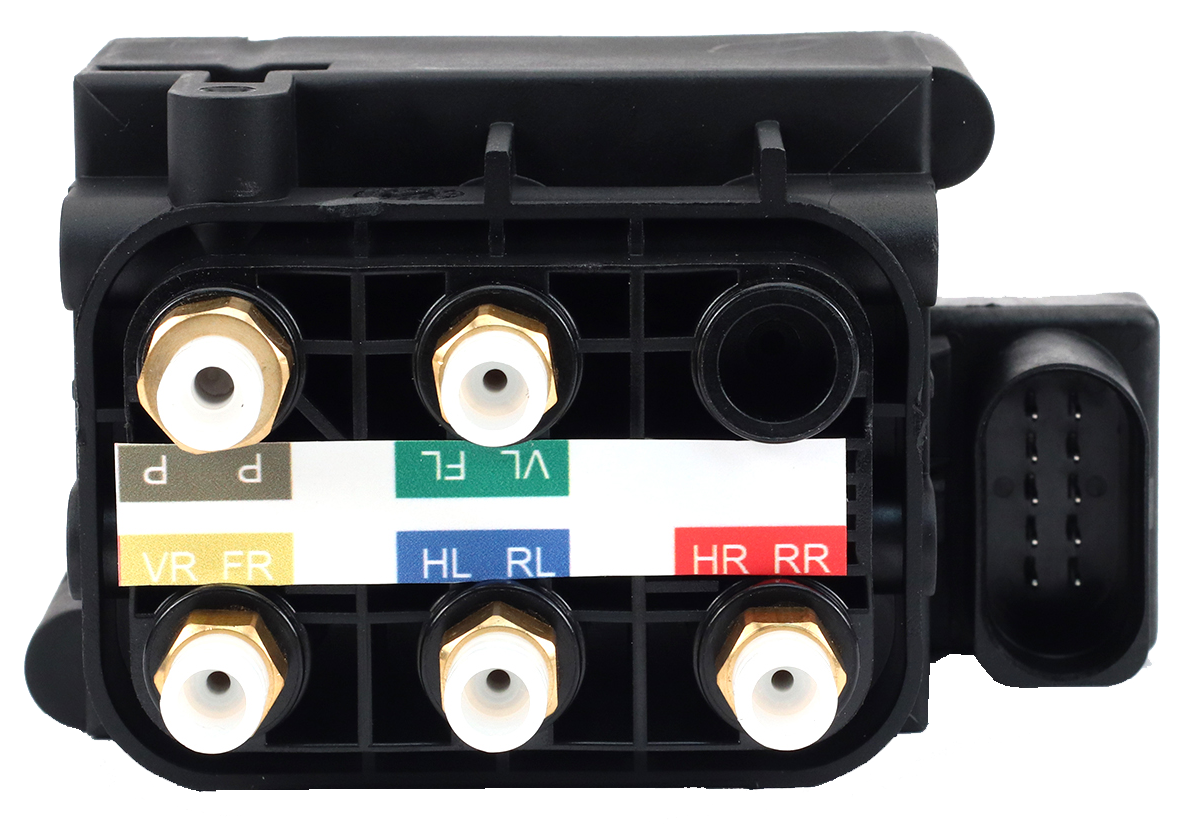 The six solenoid valves inside the valve block are activated by the ECU (Electronic Control Unit). It is a common misconception that the air springs are always directly fed by activation of the air compressor. In most cases the air bellows are filled through the pressure reservoir. The air compressor pressurizes the air in the reservoir up to 15 - 16 bar. This pressurized air in the reservoir is used for controlled pressure build-up and as a buffer. The general objective is to use the pressurized air as efficiently as possible, so the compressor runs as little as possible. This prevents overheating and keeps the energy consumption low.

Over time the solenoid valves in the valve block can become sticky or blocked by small particles that have circulated through the system when operating. For example, when an aging compressor breaks down, the valve block can consequentially become damaged too. Due to overheating, small metal particles can block the solenoid valves and disturb the air distribution. Symptom: the vehicle is lower in one or more corners. This symptom could also occur when there is a leak in the air spring. Fortunately, the actual cause can be easily identified by swapping the concerned air line in the valve block.If the valve block is the issue, the problem should then move to another corner. If the problem stays on the same side, it is indeed an air leak.

If the dryer no longer has the capacity to keep moisture out of the system, the valve block can corrode internally. Additionally, when the outside temperature drops below zero degrees Celsius, the moisture inside the valve block can freeze causing it to stop functioning.

One last thing to keep in mind is that normally the airline from the air compressor to the valve block is unpressurised if the compressor is not running. This is done to allow the compressor to start easily. If for one of the abovementioned reasons this airline stays pressurized, much more heat is built up each time the compressor is activated. This could lead to a burned-out compressor. So, even though it is small, this significant component of the air suspension system deserves some attention – especially after a compressor replacement.

This information is provided to you by Arnott – Air Suspension Products. With more than 30 years of experience in engineering, designing, and manufacturing high quality air suspension components for the aftermarket, Arnott is the technical expert when it comes to air suspension systems. Arnott’s products are produced with high-quality, OE components offering exact form, fit and function. Each product is extensively tested in our American and European facilities and custom-tuned to suit the specific vehicle make and model before being produced.